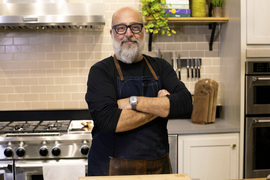 An Emmy-winning and four-time James Beard Award-winning TV personality, chef, writer and teacher, Andrew Zimmern (andrewzimmern.com) is regarded as one of the most knowledgeable personalities in the food world. As the creator, executive producer and host of Travel Channel’s Bizarre Foods franchise, Andrew Zimmern’s Driven by Food and Emmy-winning The Zimmern List, he has devoted his life to exploring and promoting cultural acceptance, tolerance and understanding through food. In 2020, Andrew returned to television with the MSNBC series What's Eating America. His latest series, Family Dinner, airs on Chip & Joanna Gaines’ new Magnolia Network and streams on Discovery+.

Andrew is the founder and CEO of Intuitive Content, a full-service production company and creative agency that develops and produces original television, digital content and advertisements. In 2021, Intuitive Content was named one of the top 100 production companies in the world by Realscreen. Intuitive Content works with a diverse group of networks including MSNBC, Magnolia, Hulu, Animal Planet, Travel Channel, Reelz, Discovery Science and Food Network, as well as companies like Whirlpool, Marriott, Caribou Coffee, Sleep Number, The National Football League and AquaChile to create brand-driven series and advertisements. In 2020, IC premiered What's Eating America, a series for MSNBC exploring the civic stories of our time through the lens of food. In 2021, they premiered Family Dinner, which follows Andrew as he discovers how the cultural, regional, and historical facets of who we are inform what and how we eat, and in 2022, they will premiere Andrew Zimmern’s Wild Game Kitchen on the Outdoor Channel. Other IC series include Big Food Truck Tip, Crash Test World, Zoe Bakes, How to Survive a Murder and The Zimmern List, which won a Daytime Emmy Award for Outstanding Travel and Adventure Program. Andrew was also nominated in the Outstanding Host category.

Andrew has written four books—The Bizarre Truth, Andrew Zimmern’s Bizarre World of Food, Andrew Zimmern’s Field Guide to Exceptionally Weird, Wild & Wonderful Food, and Alliance of World Explorers, Volume 1: AZ and the Lost City of Ophir, a grade level series which won the Gold IPPY in Juvenile Fiction. Andrew sits on the board of directors for Services for the UnderServed, Project Explorer, Charlize Theron Africa Outreach Project and Soigne Hospitality. He serves on City Harvest’s Food Council, is the International Rescue Committee’s Voice for Nutrition and a Goodwill Ambassador for the United Nations World Food Programme.  He is a founding member of the Independent Restaurant Coalition, fighting to save restaurants affected by Covid-19. He resides in Minneapolis.