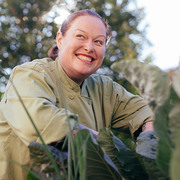 As chef and co-owner of the award-winning FnB restaurant in Scottsdale, Charleen Badman is one of Arizona’s most celebrated chefs. A James Beard winner for Best Chef of the Southwest 2019, Charleen is known as the “veggie whisperer” for her ability to coax the very best flavor out of locally grown vegetables, which are featured prominently – although not exclusively – on the FnB menu. Her unfussy, yet boldly flavored menu changes seasonally, and sometimes even week-to-week with tweaks based on what’s currently available from local farmers.

Charleen and FnB have won numerous awards, including a “Best New Restaurant” designation by every major Phoenix news media outlet in 2010. That same year, Food & Wine magazine selected Badman’s braised leeks topped with mozzarella, mustard, breadcrumbs and a sunny-side up egg as a “Top Ten Dish.” In 2013, Charleen and co-owner Pavle Milic were inducted into the Arizona Culinary Hall Fame as “Best Restaurateurs.” Prior to opening FnB in late 2009, Charleen was the sous chef at Café Terra Cotta in Scottsdale, the chef de cuisine at the famed Lobster Club in New York City and the chef/co-owner of the Greenwich Village restaurant, Inside. Charleen is a past President of the Phoenix Chapter of Les Dames d’Escoffier, an international organization of women culinary leaders, an alumnus of the James Beard Boot Camp for Policy and Change and the founder of Blue Watermelon, a Slow Food Phoenix coalition of local chefs and activists focused on improving school lunches.