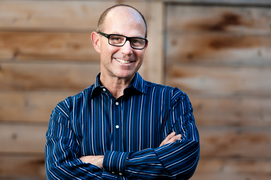 Aaron Noveshen is the Founder & Chairman of The Culinary Edge (TCE), America's leading innovation consultancy. TCE fuses culinary excellence, operational expertise, and human-centered design to forge the future of what we eat and drink. Aaron and his team have worked with 30% of the top 200 restaurants and co-created over 25 global and regional restaurant brands. Aaron leads TCE Ventures which hatched Starbird Chicken, TCE’s first self-actualized and self-operated concept. Starbird opened to critical acclaim with the Breakout Brand Award from NRN and currently operates 12 locations in the Bay Area and Southern California. Aaron is also the co-founder of Pacific Catch, the co-founder of World Wrapps, the Director Emeritus of the California Restaurant Association and the former Chairman of the board of the California Restaurant Association Foundation.

Workshop: Navigating the Foodservice Technology Landscape - Day 1 - Prioritizing Your Technology Needs
Saturday, May 21 • 8:00 AM - 9:40 AM