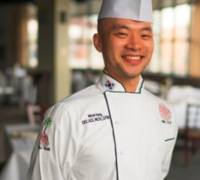 Born in South Korea and raised in Chicago, Illinois, Chef Wook Kang had an interest in food at an early age. Having been influenced by his Korean heritage and the melting pot of cuisines in Chicago, his love of cuisine led to a career in food. He has held positions at prestigious restaurants that would inspire his creativity and the appreciation of food of all cultures.

The lessons and inspirations he learned from there, provided the philosophies he has established as a professional, at Kendall College. Prior to Kendall College, Chef Kang served as the Program Chair/Director at Le Cordon Bleu. A traveling enthusiast, Kang enjoys learning about new cultures and exploring the cuisines across the world. In addition, Kang is a frequent speaker for education, conferences, and industry-related events. In 2017, Kang was voted Central Region Chef Educator of the Year by the American Culinary Federation.